The Oklahoma City National Memorial is a memorial on the grounds of the Alfred P. Murrah Federal Building in Oklahoma City, OK. honoring all who were affected by the homegrown terrorist attack of Timothy McVeigh on April 19, 1995. The memorial is located on NW 5th Street between N. Robinson Ave. and N. Harvey Avenue.
The outside of each gate bears this inscription:
We come here to remember Those who were killed, those who survived, and those who changed forever. May all who leave here know the impact of violence. May this memorial offer comfort, strength, peace, hope, and serenity.
This Memorial has an average of 350,000 visitors per year. The Outdoor Symbolic Memorial sits on just over 3 acres and consists of the following segments and is accessible day or night. 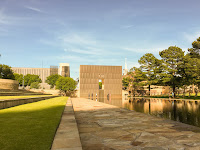 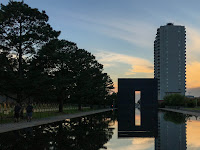 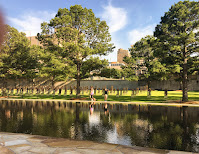 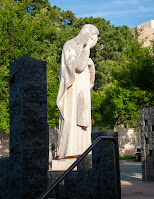 This memorial is one that will live in your mind forever. I have visited here many times. I will be back again and again.
Comments are welcome.
at January 31, 2023 No comments:

"Stand by Me" is a song originally released in 1962 by American singer-songwriter Ben E. King and written by him, along with Jerry Leiber and Mike Stoller, who together used the pseudonym Elmo Glick. It has also since been recorded by John Lennon and several other notable artists. I figured I should join the crowd.
Stand by Me - performed by Keith Birmingham.
*****
I expect it to be a slow start but it is my hope that after working the past almost 3 months just to reorganize my computer work I will be posting a photography article to this blog at least once per week. I am also trying to get back to playing music, and if possible I hope to also post a music video at some time during most weeks. Right now I am practicing my music "some" while trying to get the calluses built back up on my fingers. I have lost those calluses in the past three years due to a mess up life, which I will also post about.
at January 27, 2023 No comments:

NOTICE: When I first walked this trail it was open to the public. This trail is now owned and maintained by the Sun City MacDonald Ranch Home Owner's Association and is only open to residents and their guests. It is now used only by the community residents. Unauthorized users of the trail can be fined. It is closed to the general public. For additional information visit: https://scmronline.com/

You can find more info at: https://www.alltrails.com/explore/recording/city-view-trail--354

City View Trail was my first nature walk in the Las Vegas Valley, and it nearly killed me, literally. Quiet simply, I was a sixty-eight-year-old survivor of a quadruple heart bypass, and a 35-year over-the-road trucking career with the gut to prove it. I was 10 years into my retirement but only 45 pounds lighter than my top weight as a driver. I was not physically ready for the climb to the top. 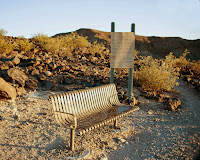 This trail is just over a mile in length with more than a 300-foot climb to the top. The third photo on this post is of a park bench that was halfway up the trail. I was literally gasping for air when I reached this bench. At this point, I was already debating whether to turn back, but I guess my military training kicked in. Either that or my Okie blood started boiling. Anyway, I sat there until a young couple passed by me with smiles and giggles. I'm still not sure if the giggles were about me or not, but they kept walking and I soon followed them, slowly. 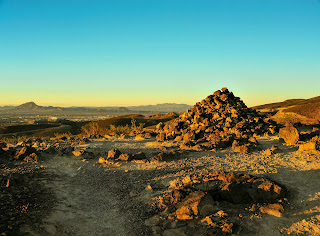 A view from the top.
*****
It probably took me forty-five minutes to hike to the top. I know that it was just over a mile, and I was mad that there was no bench to lie down on when I got there. But, the views were magnificent. When my website is back up and running I will post more photos, and I will edit them before posting.
Meanwhile, I had to figure out how to get down. Should I go back the same way I came up, or should I take the much less used trail on the back side of the hill? I guess my pride in making it up pushed me into taking the back trail back down. But, I did stop observing the splendid views long enough to say a prayer before heading downward.
I quickly understood why the backtrail was not as used as the trail I climbed up on. The rocks were mostly small boulders with a few spots where I had to step down while making another quick prayer. And, I did land flat on my backside at one point. While sitting there rubbing my backside I said another quick prayer and listened for the possible rattle of a snake in the rocks. But, there was no sound but that of me gasping for air.
I made it back to my car and sat there for twenty minutes before leaving. As of today, I have never been back to City View Trail, but I have made five failed trips to the Las Vegas Valley since February of 2021 in search of a place to live. But, I still hope to go back to finish the project that this adventure started me on. I have photographed over 100 parks, preserves, trails, memorials, monuments, and museums in the Las Vegas Valley. That is about half of them, and I want to photograph the rest of them. It may be some time before I get back there, and I am not positive that I will ever live there again but I am going back. Meanwhile, I plan to keep the apartment I now have and van life in Oklahoma and the surrounding states to photograph and write blog articles about my travels.
*****

Learn to Travel, Travel to Learn

Better World Media is my studio website for (link not included until the site is back up) photography. It has recently been taken down for a redesign and update. However, I hope to have it back up no later than March 1, 2023. I also have a blog by the same name (https://www.betterworldmedia.us/) I use this blog to promote my music and other work in the music business, and to document my travels. A pet project that I have planned for this site is the promotion of “busking“, the street name for “street entertainment”. I also keep a private blog as a record of all of the songs that I have written. I love doing travel, nature, and documentary-style photography, and this is an additional enterprise that is growing from my photographic work. 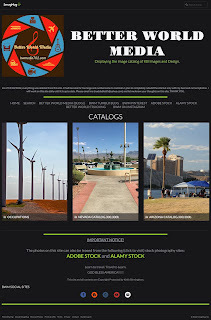 It has been a long but productive two weeks. Things are starting to look better. I have scanned several thousand prints and slides and put them on my computer. I plan to look for a better and cheap way to do the same with several thousand negatives. Two days were actually spent organizing the folders to be put onto the computer. I am now finished with that, I think. Next, this morning I did something I should have done 2 or 3 years ago. I deleted "everything" off of my BWMedia studio website. I have now started to repost only what I think are my best shots. My plan is to make the site ready for when I soon start clicking my shutter again. Until then I will be reposting more of what I think are my best shots.

You can post your comments and suggestion about my site by visiting the site or e-mailing me @ maddadkeith@yahoo.com.