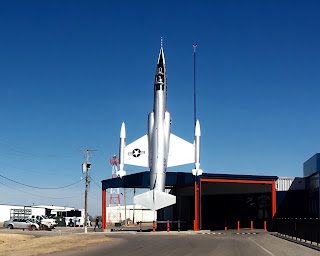 *****
Stafford Air and Space Museum
Is there a better way learn about outer space than thru a hometown hero, and someone who has been there?

Located in Weatherford, OK. The Stafford Air and Space Museum became a Smithsonian Affiliate in summer of 2011. Weatherford is the hometown of General Thomas P. Stafford, He is currently serving as Deputy Chief of Staff, Research, Development and Acquisition Headquarters of the U.S. Air Force in Washington, D.C.

General Stafford is a recipient of the Congressional Space Medal of Honor. A veteran of four space flights, he piloted Gemini VI, and commanded Gemini IX, Apollo 10 and the Apollo-Soyuz Test Project Mission. Born in 1930 Stafford was selected by NASA in the second group of astronauts in 1962. He would fly four historic space missions (Gemini 6, Gemini 9, Apollo X, and Apollo-Soyuz), three of them as mission Commander.
For his efforts as Commander of the U.S and Soviet joint Apollo-Soyuz mission, Stafford received a Nobel Peace Prize nomination. Stafford is the recipient of many prestigious awards, including the Presidential Medal of Freedom, the Congressional Space Medal of Honor, the NASA Distinguished Service Medal, and the Oklahoma Aviator of the Century award.

The Stafford Air and Space Museum is a fantastic educational experience for the young and old alike. For the young it is a place that gives birth to ambitions and dreams of major accomplishments. For the old it is a place to relive the history they helped to create.

Aircraft on display include:
a T-38, an F-86 “Sabre”, a Russian MiG21R, and an F16 “Fighting Falcon” with bombs and sidewinder missiles. Also on display are full-size replicas of the Wright Flyer, Spirit of St. Louis, Apollo Command Module, and Gemini spacecraft and a Titan II rocket launch vehicles.
mod
The museum is located along Route 66 at I-40 and Exit 84 in Weatherford, and welcomes visitors seven days a week. The museum is closed  Thanksgiving, Christmas Eve, Christmas Day and New Year’s Day.