Par For The Course 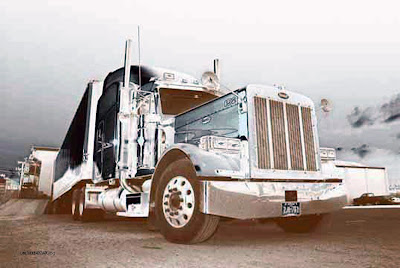 Once a trucker always a trucker.

Living in Oklahoma has never been easy for me. I grew up in a small western Oklahoma town at a time when people were moving to cities where employment opportunities were more abundant, if not plentiful. Today is no different. But, I am looking at it differently.

Today I realize that my problems with Oklahoma are of my own making. And, my problem is that I have never been able to stay in one spot since the day I left my hometown to join the navy. I am a habitual drifter. I have learned to travel. Now, I travel to learn. I do not plan to change. However, the last three years have been filled with rough times for me. And, I have learned a lot in the process of getting through them.

Three years ago, in November of 2019 I once again, returned to Oklahoma, but for a good reason. One of my sister's health was failing and I was the only one available to care for her. So, I came back to Oklahoma. I stayed with her in Clinton until I could move into my own apartment in Weatherford. Then came COVID, and at about the same time the government shut the country down my sister was admitted to the hospital for her ailments. Her body was shutting down. For the next 8 months, I was busy driving from one hospital or assisted living center fulfilling her wishes and trying to keep her company while doctors tried to help her. My sister passed away in October of 2020, not from COVID but from her body shutting down from previous ailments that she had in previous years, and the isolation caused by the COVID shutdown also caused her tremendous mental anguish.

I lived in Weatherford until February of 2021 to live out my lease agreement and save money. I left Weatherford in the last week of February to return to Nevada to start working on my photography projects again. But that was not to be. As a matter of fact, I have made 5 trips to Southern Nevada in the past 21 months in failed attempts to find a place to live. Many things have changed all over this country since March of 2022 when the country shut down due to COVID. Las Vegas, I believe, has been changed forever. Like other large cities, Las Vegas has become more angry, distrustful, and obnoxious. The homeless population is way up from what is was when I left there. The entire Strip smells like pot these days. Service in the casino/hotels is a thing of the past.

On my last trip, it finally hit me that it was not being in Las Vegas that brought me the most joy. It was the 1,100 trip from western Oklahoma to Nevada that gave me joy. I love to travel. So, I have now rented an apartment in Weatherford. I am saving every penny I can and making plans for my future while catching up on things and doing things I let slide while trying to make a better life elsewhere. Someday I hope to return to Nevada, but maybe just to visit. Meanwhile, after 13 years of retirement I am considering trying to return to the trucking industry to feed my travel bug.