One Thing Leads to Another

Well, I have to admit that I thought the same thing. When I arrived in Las Vegas back in May of 2017 I thought I'd go out to a city park to get some exercise. All I took with me was a bottle of water and my cell phone. The first park I went to was, of course, Silverado Ranch Park because I already knew where it was.

In the northeast corner of this park is a skateboard park. There were about a dozen kids there making full use of the facility. I began my walk there, but not before snapping a few photos and a video with my phone. I walked at a slow pace and snapped photos of the 3 baseball fields, basketball courts, and exercise/fitness court. On the west side of this park is an empty field for most of the 3/4's mile to Las Vegas Blvd. On the other side of LVB is South Point Casino/Casino. The summer sun set that huge building aglow, and I stopped to photograph it before continuing on. Next, I passed by a grassy field that is mostly empty except in the southwest corner of the field. There are picnic areas here, and people were gathered in small groups around three of the sheltered tables. In the southeast corner of the park there are 3 dog parks for large, medium and small dogs. And, along the fence that enclosed one of the baseball fields there are more park benches, and a couple of picnic tables. In the middle of the park there is a huge playground for the kids, restrooms, and an equipment shed. My camera was pretty busy that morning. I actually walked around the park twice, and walked though the middle of it before heading home.

I am from a small town in Oklahoma, and back where I came from we never had parks with these kinds of facilities. As an adult I was on the road and never had the opportunity to explore the cities and towns that I traveled through. My job was to find a warehouse, get there, get loaded or unloaded, and head for my next drop or pickup. So, I was surprised by the pleasantness of being in a city park.

A couple of days later I found myself at Pucinni Park, and I think that is where the bug really bit me. This park had all of the same kinds of facilities plus a tennis court. And, I found myself exploring paths that led out of the park, up the hill, across Seven Hills Drive, and splitting off into more trails. And, I was hooked. The next day I came back with to the same park with my Nikon.

One thing leads to another. Somehow I need to find more time to spend photographing more subjects in the Las Vegas Valley. The Strip, Fremont Street Experience, off-strip casinos, car shows, conventions, baseball, football, soccer,  concerts, and simply dozens of community events are on my "want list". To date I have photographed around 50 parks and trails in the Las Vegas Valley. And, I have barely made a dent in number of parks here. At the rate I am going it will take at least 3 more years to get to just the city parks in the Las Vegas Valley. And, then there are the county, state and national parks that are within a couple of hours drive from here. In other words, I have quiet a job ahead of me. 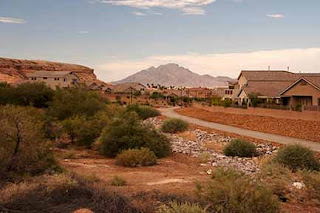