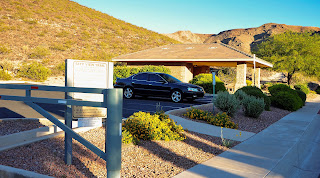 *****
On May 20, 2017,  City View Trail was my first nature walk in the Las Vegas Valley. It was the beginning of what became an obsession I developed with photographing parks and trails. And, it almost killed me. Well, it certainly made me think I was going to pass out from exhaustion and dehydration. It is now on private property and closed to the public, and several reviews state that the locals are very rude and they will call the cops. There were no signs declaring it to be private property when I was there. 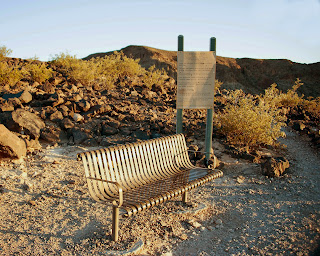 *****
This bench is at the halfway point and might be why I am still alive today. I was winded by the time I reached it, but dummy me had to keep going. For younger folks with little or no health problems, this is not that hard of a climb. But, for a fat-butted retired truck driver with a recent quadruple heart bypass, it can be a killer. But, I rested here for a few moments, took a few photos, and climbed to the top. 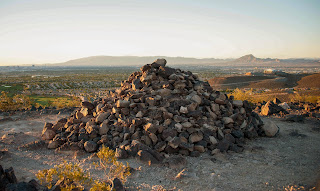 *****
The pile of rocks at the top was, I think, places there by others before me that made it to the top. Reviews show that lots of people have returned several times. Me, although I would like to boast that I have returned, I have not done so. There are lots of hills, mountains, valleys, and streams to cross in the Las Vegas Valley. And, I did not follow the same path down that I came on. I followed a much less used path down the back side of the hill. I was elated that I was still alive when I reached the bottom.
More photos of this climb can be viewed and purchased from the Better World Media website. Thanks for stopping by my blog.
at July 21, 2022